Last price update was: May 21, 2022 1:25 am
× Product prices and availability are accurate as of the date/time indicated and are subject to change. Any price and availability information displayed on Amazon at the time of purchase will apply to the purchase of this product.

Sony HT-G700 3.1ch Soundbar with Dolby Atmos/DTS:X Cinematic Surround Sound...
$498.00
May 21, 2022 1:25 am
× Product prices and availability are accurate as of the date/time indicated and are subject to change. Any price and availability information displayed on Amazon.com (Amazon.in, Amazon.co.uk, Amazon.de, etc) at the time of purchase will apply to the purchase of this product.
1 new from $498.00
Buy on Amazon

The Sony G700 soundbar is equipped with a separate subwoofer and 3.1 (3 prime speakers, 1 inbuilt subwoofer) built-in channel system with the centre speaker. This combination is rated to give you a total of 400W audio output.

The soundbar also supports Dolby Atmos, DTS:X, and VIRTUAL SURROUND TECHNOLOGY such as S-Force PRO, Vertical Surround Engine to give you an overall surround sound upscaled to 7.1.2.

Yes, Sony G700 soundbar claims to give you an immersion surround sound experience upscaled to 7.1.2 levels (mentioned by Sony officially).

And it’s because of Virtual Surround Engine!

Vertical surround engine gives you the experience of surround sound even if your TV doesn’t have built-in speakers. The 3 front speakers create virtual surround sound that seems as though it comes from all sides.

Sony HT-G700 is a great choice for people who want to watch movies and television shows. It has a dedicated centre speaker for excellent sound quality, producing clear voices. It can get loud and fill a large room or crowd as G700 has total of 400W audio output, and there’s also an audio enhancement feature to enhance voices.

Plus it supports 4K HDR Pass.

It is not really a 3D soundbar as it does not simulate height and surround cues using up-firing speakers as most Dolby Atmos and DTS:X enabled ones do. But still, Sony G700 deliver 3D surround sound using 3 different technologies from Dolby, DTS, and Sony itself. 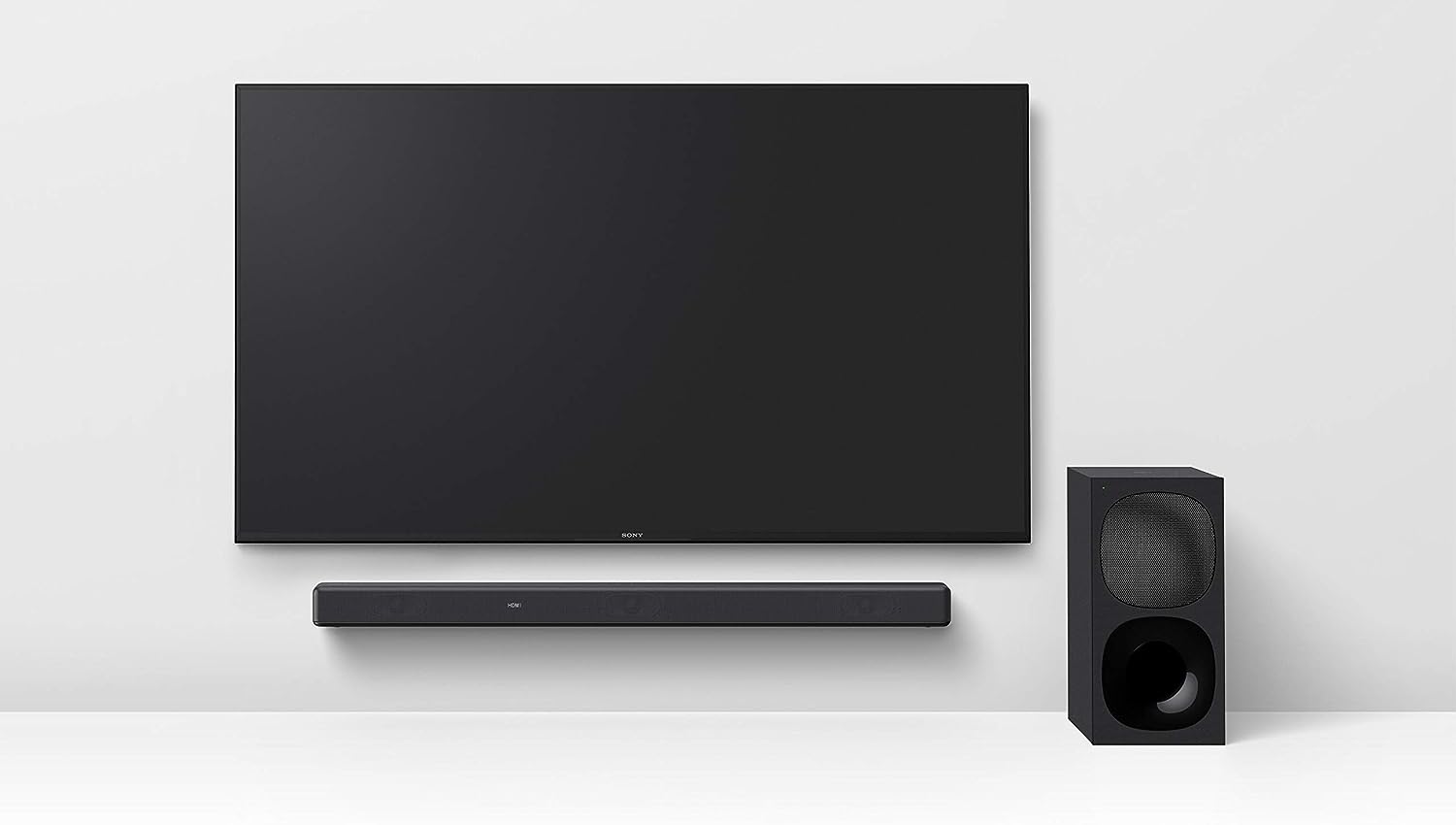 Soundbar has three HDMI inputs, two of them being ARC compatible. It supports all audio formats (including Dolby Atmos) and can be connected to any TV or monitor with an HDMI port. There are different speaker modes to choose from, as well as a subwoofer mode with some bass enhancement options.

You can also use the Bluetooth function to stream your favourite podcast or audiobook.

Soundbar: Sony G700 has a sleek soundbar that’s very similar to other Sony soundbars. Made from good quality plastic, it has a big metal grill to protect its speakers, giving it an overall premium look.

The speaker grilles are rounded, and the connection ports are hidden behind the unit. The display underneath the grill shows modes.

Subwoofer: This product comes with a wireless subwoofer. Sony G700 subwoofer is mainly made of plastic and melamine. The port has a shiny black finish while the woofers themselves are covered by a nice metal grill. The subwoofer has a plastic plate behind it. 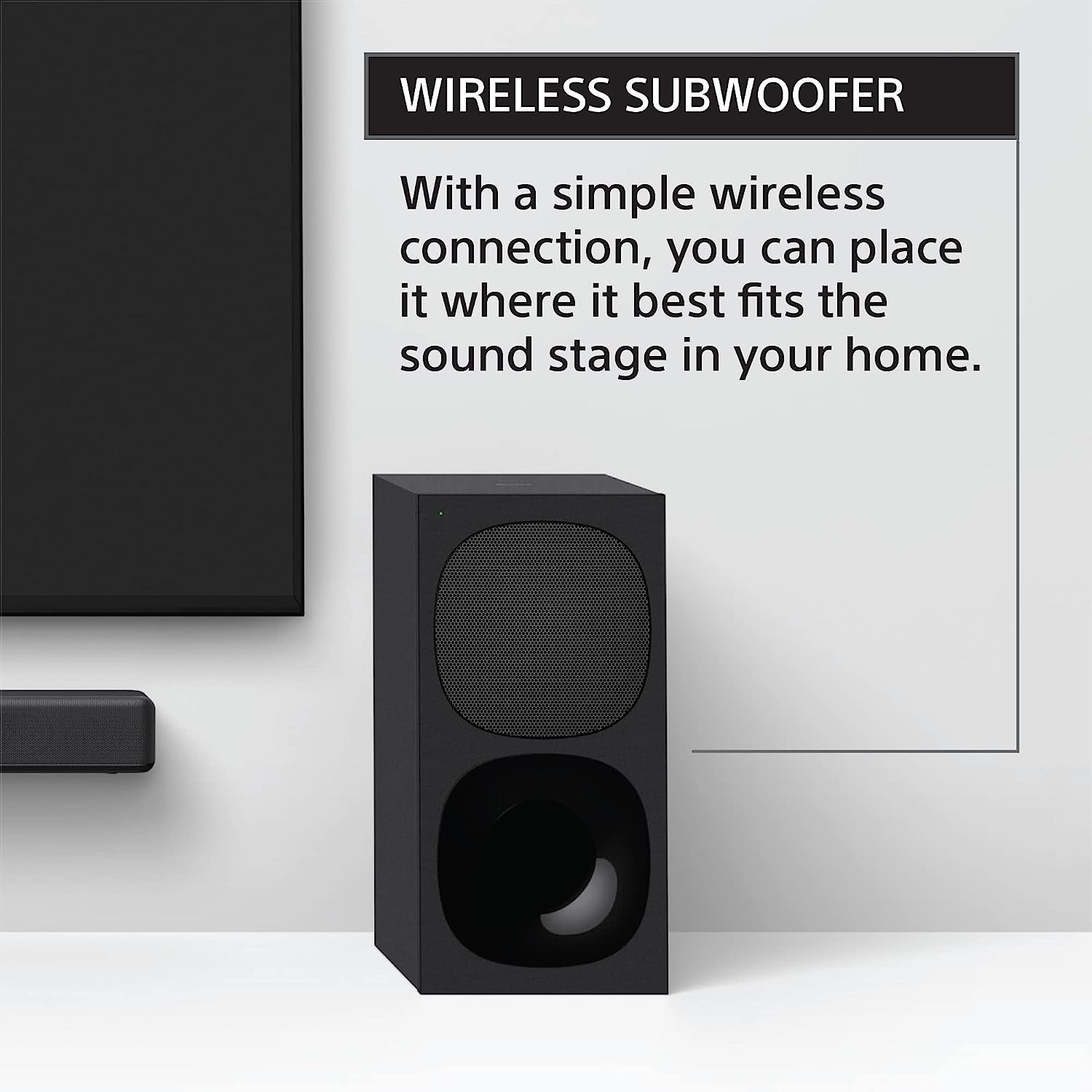 Sony HT-G700 comes with two HDMI ports. One is a standard HDMI input port, and the other is an HDMI ARC port that supports eARC. There is also an optical digital input port and a USB port for firmware updates.

While the HT-G700 doesn’t come with WiFi, it does support Bluetooth wireless connectivity. This means you can easily pair your smartphone, tablet, laptop, or other devices. You can even use them to stream music from your phone, iPad, iPhone, Android device, etc.

You can cast content from these devices to the HT-G700 using Chromecast Audio and play content stored on Spotify or Airplay 2.

As for controlling, Touch-sensitive controls are located at the top of the soundbar and towards the centre. You can control the soundbar by touching these buttons.

You can also control the soundbar with remote control.

A slim remote with lots of buttons makes it easy to change settings. But you can’t use it as a universal remote.

There are no reviews yet.

Be the first to review “Sony G700” Cancel reply

Gadgetcomparision.com participates in the Amazon Services LLC Associates Associates Program, an affiliate advertising program designed to provide a means for sites to earn commissions by linking to Amazon. This means that whenever you buy a product on Amazon from a link on our site, we get a small percentage of its price as an affiliate commision.

Amazon offers a small commission on products sold through their affiliate links. As an Amazon Associate I earn from qualifying purchases.